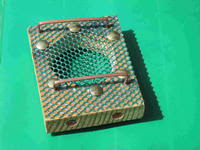 It is acceptable to use the traveling cage that the Queen arrives in for introduction, however, some people without apiaries or strong stocks may prefer this special cage which is
the best-known method to do the job.
The principle is a short passageway, fitted with a piece of the queen excluder and a very small amount of candy (1 CM candy)which is eaten out by the bees after 2 -3 hours, the excluder preventing the queen escaping. The bees feed and care for the queen and after 6 or fewer hours the longer tunnel(1.5 CM candy) is cleared out and she can join the general community in a calmer state before they have the instinctive urge to replace her.
If not clipped the queen must be transferred to the cage inside a car or other enclosed
space. Use a fingernail to prise open the small round hinge at the side of the traveling
cage, the whole cage can then be snapped apart. Place the Queen on her own inside the open
part of the new cage which can be covered with a card and placed in position on a comb of
emerging brood (or bring the brood frame into the car if not clipped) slid away and then
pressed in with a screwing movement, care taken not to cut through the mid-rib or damaging
the queen. The cage is heavy and you must keep hold of it, pressed in until placed in the
hive and the adjoining comb can be pressed into the staples to support it. Space the comb
well away from its neighbor, lower in the frame with the cage keeping your hand on it until
it is gently slid up against the adjoining comb and thus supported,(do not allow the cage to
knock against a frame when lowering it in ) the staples contact the adjacent comb preventing
the cage falling off and allowing clustering space. The old queen can be removed at the same
time as the new is given in one operation if taking away young bees as a nuc (making it
ideal for out apiaries). However, it would be better to leave the bees queenless for 6-12
hours to loose the older flying bees before putting the new one in. Ensure the tunnel holes
point upwards when fixing onto the side of a comb of sealed brood- you do not want the queen
to fall onto the floor on release.
The queen does not want to be confined in the cage for too long in case the bees build  queen
cells- hence the very small amounts of candy, allowing her to join the general community just
at a time when they have missed their old queen, and before they have felt the instinctive
urge to replace her by rearing another.
If you have an out apiary the best results are obtained by mixing bees, take a frame of
bees and brood from three different hives together with a food frame leave queenless for at
least 6 hours and take to another apiary, when in place introduce the new queen with the
cage on a frame of sealed brood.
The cage is really designed to be used with frames of brood. If a hive is queenless and broodless then the tunnel without queen excluder should be widened to allow an extension tube of 1 inch to be added and the whole filled with candy. This will delay the release of the queen for a few days.
In all cases, it is best to not go back into the hive for a few weeks or months until the queen has settled in and laying well. Observation at the hive entrance with pollen pouring in should show a success. The danger of balling the queen is always present during this time and leaving the cage will just mean having to cut away some wild comb later on. If you do want to remove the cage, wait a week, and remove it in the evening without using smoke.


Queen acceptance can reach 96% in the case of nuclei when all instructions are
followed. Return towards dusk a week later to check she has been released and alive, using
lightly sugared water rather than smoke. Remove the cage and any brace comb.
R.O.B Manleys book"HONEY FARMING" pages 200-207 describes this cage and the great success it brings to the most difficult and uncertain of all beekeeping operations.
Please post your COMMENTS on any advice you can give a beekeeper on using the cage.

A video can be viewed, Introduction Cage