Are you breeding the honey bee on a genetic basis? Or interested in seeing the different traits of the races of honey bees in your apiary.
Several races of queens are now available within the UK from BICKERSTAFFS.
The next post lists them all, together with the traits of her progeny. Study it with care.
Beekeepers often look for different characteristics and the Greek queen breeding centre has described them for you.
All queen bees are mated in the region of Epirus at the northwest corner of Greece.

A family-based at Ioannina is responsible for producing the queens. Founder John and his
wife Margarita, their two sons Jim and Zacharias, daughter Labrini and husband Panagiotis.
The BuckfastXCecropia, Carnica, Caucasia, Cecropia, Macedonica or Ligustica may be ordered at
any time but there will need to be a fortnights notice for any bee that is not a
BuckfastxCecropia.

The queens are sent out from the Greek breeding station late Monday evening to be flown
early mornings Tuesday from Athens airport which usually arrives Tuesday evening in the UK.
They are mailed straight away to be with the British beekeeper between Thursday and
Saturday. Because of unpredictable events, it is best to track ordered queens from the QUEEN TRACKING page.

Every queen is sent in a small plastic cage with attendant worker bees and a hive tag with a
note of the breeding date, race, and suggested date of replacement. This is pinned to the
crown board to ensure that the hive is always headed by young first-class queens. It is best
not to run a Queen beyond two seasons heading a hive. Older Queens should not be killed,
instead, place in nuc boxes or spare equipment to continue to provide bees and brood for your
other hives.

Because the water-based spot placed on the queen can wear off it is advised to remark her
perhaps later in the season to ensure the original queen is still heading the hive. When
bred with drones from an unknown source the results can be variable.
Try to give a good laying queen like the BuckfastxCecropia the equivalent of two deep
National hive bodies, with plenty of empty supers to take away pressure from honey
congesting the brood chamber. Run an `open brood nest` discard all poorly drawn comb or any holding granulated honey to ensure room for a good queen
to lay to her full potential. Restricting her room especially in the Spring is to invite
swarming. If the weather is poor or changeable leave Bakers Fondant/Candy / Sugar Blocks * with the hive to help provide stronger stocks for when a honey flow may occur.

*BAKO  White fondant is available for collection direct from depots in each region of Britain, in 12.5 kg blocks.  Wrap in foil.
* DIY Sugar Blocks 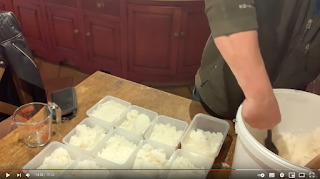 The best way to introduce queen bees is to make up a nucleus using bees and brood from three
different hives together with a food frame and moving to another apiary, leave queenless
overnight and then introduce your new queen using the Bickerstaff cage.
During the season lightly sugared water from a hand sprayer can be all that is needed when
working the bees in reasonable weather, it is a good idea to add a few drops of peppermint
oil to the sprayer to help knock out some Varroa mites, but do not rely on it alone!
In the Spring, to help control Acarine, Varroa, Nosema it will help your bees if you add
thymol to your sugar syrup (dilute 30 gm thymol crystals in 150ml surgical spirit or
vinegar....add 5ml of the solution to 13.5 liters syrup) repeat in early Autumn with
entrance blocks in place.

In the late Autumn, Oxalic acid is used by heating the crystals in a copper tube using a blow
lamp. The season starts in the Autumn. Ensure stocks are equalized in strength, headed by young queens, treated against
Varroa, Acarine and Nosema which are endemic, with plenty of stores for the winter, and in a
sheltered spot that catches the winter sun
.
Help control against Nosema by adding 1 Teaspoon of Tea Tree Oil per gallon of syrup.

Autumn is an ideal time to requeen. Acceptance is higher at this time of year. There is no
set back the following Spring. The hives will now be much healthier, stronger, earlier. Young
bees are laid for stronger overwintering and as the Queens are recently mated they will
still give two seasons productivity.
If you live in an area with an early spring flow have the colony go into winter with the equivalent of one and a half National brood chambers together with two supers of honey
without a queen excluder, the BuckfastxCecropia will then be in a strong shape when oilseed
rape is in flower.
Ioannina is a beautiful lakeside town in the North West Region of Greece (3min 54sec)

Posted by BICKERSTAFFS at 10:52 AM