Sublimation of Oxalic Acid
The Oxalic acid Vaporizer is heated with a gas/paraffin torch for approximately 5 to 6 minutes causing the sublimation of 2-3 gram oxalic acid crystals. It is important to keep the elbow still and slightly lower than the outlet tube at all times until it is removed from the hive. This prevents the acid from running out as a liquid before it has had time to be heated and sublimate into the hive as a vapor. Apply the heat close to the elbow where the liquid will be and along the entire length for several minutes. Once fumes are first seen(usually vapor is seen from any cracks close to the pipe end).continually run the torch along the entire length of the tube to re-liquefy any crystals that stick inside the pipe. If crystals are seen at the tip end when removing the pipe, apply heat there and quickly return it into the hive, all the while keeping it tilted back.
It is then left in place for a further minute or two while the vapors settle. Once removed the hive is left closed up for 10 minutes. Use a metal rod to check the pipe does not become blocked with any acid condensing in the tube, and apply heat to any blockage. Short length pipes of six inches work best.
To treat several hives, do not unscrew the cap, instead put the crystals in at the tip end, allowing them to fall to the back. Constantly heat along the entire length of the tube, keeping it slightly tilted back. Once sublimated, with the funnel, refill and move to the next hive. Each hive will then take less than five minutes to treat.
The particles of acid cover the bee's bodies and kill the mites hiding under the abdominal
segments as well as condensing on the honeycombs and hive parts. As the bees move around
they carry very small amounts of the crystals on their feet. Along with hive humidity, the
oxalic acid is active and corrodes the mite's proboscis. The mites die of starvation.
When oxalic acid crystals are heated to 315F it starts to sublime ( goes directly from
solid to liquid to gas) This is why it is important to not allow the liquid to run out of the tube until it has had time to turn into a vapor.
Colonies are always healthier in the Spring after treating with the acid. As all parts of the hive are treated it acts as a hive disinfectant and will kill any Acarine. If the beekeeper does not want to use a blow torch, other methods can be devised, such as the use of a tea light to heat the oxalic acid inside the hive. This will work just as well but takes longer and should be left for a few hours after lighting.

Oxalic acid can cause damage to health if swallowed and protective equipment should be worn. As the Vaporizer can reach a high-temperature glove must be used and no parts of the metal should be touched.
A nozzle is included which can be used as a funnel for adding the crystals. If any crystals fall around the cap and thread it should be wiped clean before heating to prevent the thread seizing. The nozzle can also be placed at the outlet when used with small entrances, nucs or polyurethane hives. Use a flexible wire to keep the tube clear and oil around the cap. 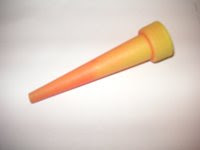 As well as from applying from below, an eke can be placed over the brood, with a hole drilled in the side to place the nozzle from above. If a glass or perspex crown board is available the beekeeper can see the sublimation. Using a face mask, goggles and gloves the tube can be heated in the open air to gauge how long it takes to sublimate and to find the correct technique of applying the heat to ensure all the acid vaporizes. Remember it must be tilted slightly back and kept still. The tube is only made long to allow a handhold, experimentation will allow it to be cut to as little as six inches in length when mole grips or such as appliances should be used.  Best and easiest results are obtained when an eke ( empty super and glass/perspex crown board ) is used with a drilled hole, so avoiding having to hold the tube.

* No residues in wax or honey * No resistance formed * Easy to use * Economical * All bees get covered * Gentler than dribbling methods * Can be used several times in a season * No queen losses *Swarms & bloodless treated anytime Vaporizer lifelong use * 100g Oxalic acid included with the vaporizer.
*Tracheal mite also killed

Vaporizing is gentler on the bees than dribbling, the hive is not opened and all the bees and hive parts get covered, including the mites hiding under the abdominal segments.


HANDLE OXALIC ACID SAFELY. Keep out of reach of children. Wear goggles, gloves, and a protective face mask FFP3.In case of eye contact, immediately wash out with water.
Sublimation should see all the vapors staying in the hive, with all cracks sealed, but a face mask must be used as a precaution.


For beekeepers who trickle the acid in a liquid form, an online calculator is available here to ensure accurate measurements of ingredients, as the wrong concentration's dribbled can prove fatal, killing many bees or the complete colony.
To use the calculator, key in one figure only into the chosen box and then click on CALCULATE.
To carry out a new calculation click on the RESET button.

Posted by BICKERSTAFFS at 11:29 AM

Snoop dog e cigarette Pretty good post. I just stumbled upon your blog and wanted to say that I have really enjoyed reading your blog posts. Any way I'll be subscribing to your feed and I hope you post again soon. Big thanks for the useful info.