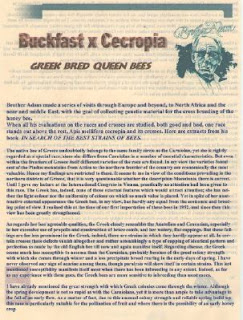 
* Buckfast X Cecropia *
BUCKFAST. A hybrid of several races, selected for gentleness, wintering, production, and disease resistance. Our Buckfast Queens are the gentlest honeybees you will find. Not inclined to rob. They don’t run. Produce white capping. Fly in cooler weather than other
bees. Pack brood nest with honey for good wintering. Curtail egg laying during dearths.
Brood development starts in early spring, which affords the colony with a large population
that is maintained until fall. They are excellent housekeepers, which aids in their control
of wax moths and provides them with resistance to diseases. (Available only crossed with the
Greek races with excellent results)

Brother Adam made a series of visits through Europe and beyond, to North Africa and the near and
middle East, with the goal of collecting genetic material for the cross-breeding of the honey bee.
When all his evaluations on the races and crosses are studied, both good and bad, one race stands out
above the rest, Apis mellifera cecropia and its crosses.
The extracts from his book IN SEARCH OF THE BEST STRAINS OF BEES  PDF can be read / download at the Buckfast x Cecropia PDF link above.

* Apis mellifera Carnica *
The Carniolan bee of Slovenia and Austria is the nearest relative of the Italian, but it is
darker, the characteristic yellow rings of Ligustica being replaced by dark bands. The
Carnica territory covers a large area of south-eastern Europe, and there are numerous
regional variations. The characteristic brood rhythm is a rapid build-up in spring, followed
by a slow decline and an early cessation of brood rearing in the autumn. It is particularly
suited to an early spring honey flow and the bees' flies in cool weather. It can survive
hard winters with a small winter cluster. She packs brood nest with honey for good
wintering. Produces combs with white cappings. Carniolan bees are more prone to swarming
than Italian bees, but selective breeding can reduce this tendency.

The European dark bee can be distinguished from other subspecies by their stocky body,
abundant thoracal and sparse abdominal hair which is brown, and overall dark coloration.
Works early in the morning. It can be runnier on the comb and balling the queen.
The black bee of western Europe. Produce white capping. Excellent flight strength even in
cold weather. The breeding of brood starts early in the spring. Use excessive propolis. Not inclined to rob. One of the best bees for good wintering. Defensive against invaders ie. wasps.
Low tendency to swarm. Careful, maritime brood cycle. Strong drive to collect pollen.
High longevity of the worker bees and queen.

* Apis mellifera Caucasia *
The Caucasian bee closely resembles A. m. Carnica in general appearance, and may not be
easily distinguished from the latter except by morphometric examination. A. M. Caucasia is
autochthonous (the original sub-species) to the mountain range and southern valleys of the
Caucasus, and to the eastern end of the Black Sea coast in Anatolia The Caucasian bee is
noteworthy for the length of its proboscis, being the longest of all the mellifera races.
Caucasians are considered the gentlest bee in the world. The abdominal bands in the queens
have a wide range in colour from yellow and black to grey. Their plus qualities are
wintering ability, reduced swarming tendency, adequate hive defense, minimum drifting, and
the production of beautiful white capping. The colony strength is slow in building and
reaches its peak in mid-summer. The bees have an inclination to utilize burr comb
frequently. Brood rearing generally starts late and the spring build-up is slow, leading to
medium population size in summer and autumn. The swarming tendency is low, and the number of swarm cells moderate. Caucasian bees are notorious for their heavy use of propolis,
especially at the hive entrance. In winter the entrance may be almost completely closed by a
curtain of resin, leaving only a few small holes for ventilation and flight activity. She
combines very well with other races, particularly Carnica and Ligustica.
---------------------------
Many hives over winter at ARTA with the milder temperatures providing a faster start to the
season both for queen mating and honey forage. October to December from the ericas and strawberry tree, early April the orange tree honey. By mid-June, hives are moved from 40-degree temperatures to the cooler region of the Pindos
mountains.


* Apis mellifera Cecropia - Macedonica *
Cecropia (west and south Greece) and Macedonica (east and north Greece) bee are the Greek
bee races. Cecropia bee closely resembles A. m. Carnica in general appearance. Queens and
drones are dark. The breeding of brood starts early in the spring and makes big colonies.
The swarming tendency is high. Like Caucasia, Cecropia bees are notorious for their heavy use of
propolis, at the hive entrance, and inside the hive so they create problems to the handling
of the combs. Honey cells are wet capped, i.e. there is no air space between the honey and
the capping, and this may lead to "weeping" of the comb. She produces a lot of honey, especially in early spring honey flows. The difference between Macedonica and Cecropia is
that Macedonica is gentler as it is one of the nearest relatives of the Carniolan bees. The Cecropia is ideal for use in breeding, passing on high fecundity without bad temper.
----------------------------
The Pindos range provide cooler conditions during the summer for forage from Acacia, clovers
and most importantly honeydew.

* Apis mellifera ligustica *
The Italian honeybee is the most widely distributed of all honeybees and has proved
adaptable to most climates from subtropical to cool temperate, but it is less satisfactory
in humid tropical regions. Brood development starts in early spring, which affords the
colony with a large population that is maintained until fall. They are excellent
housekeepers, which aids in their control of wax moths and provides them with resistance to
diseases. Aside from being industrious, they have a gentle nature and are able to adapt to
climates with extreme temperatures. On the negative side, they are inclined to drift and
have a high honey consumption, which requires ample stores for over-wintering.To combat this
they can be reduced in strength to 6 frames in late Autumn. A.m.ligustica has a low swarming
tendency. Italian bees are much more prone to drifting and robbing than the other principal
races of Europe. Ligustica makes very big colonies and it is one of the most favorite bees
for commercial honey producers. She does not use a lot of propolis.
----------------------------
From early April until mid-May the island of Koronisia is used for queen mating. This isolated spot sees over 100 mini nucs and some 10 hives of selected drones being
changed to raise different races of bees.

A project for finding the Queen Bee in a strong hive!


To keep track of hives and queen bees good records are essential.
A free beekeeping software program and tutorials can be found by clicking the picture. 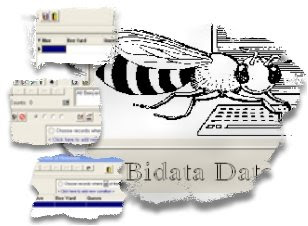 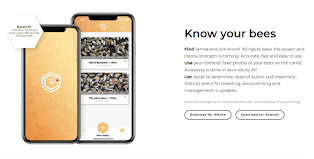